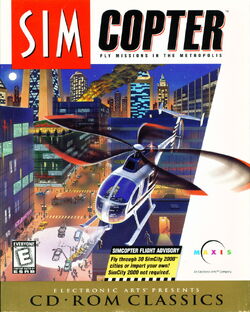 SimCopter is a computer game developed by Maxis and released in 1996. It was the first game to involve Simlish. Former Maxis employee Jacques Servin was fired for the famous SimCopter Easter egg: 300+ men dancing in speedos by the landing pad on certain dates, such as his birthday, his partner's birthday, and any Friday the 13th. The game is mostly panned for its atrocious graphics and bugs but praised for it's premise and music. The player can also import cities from SimCity 2000 and play in them.
Retrieved from "https://simcity.fandom.com/wiki/SimCopter?oldid=12945"
Community content is available under CC-BY-SA unless otherwise noted.